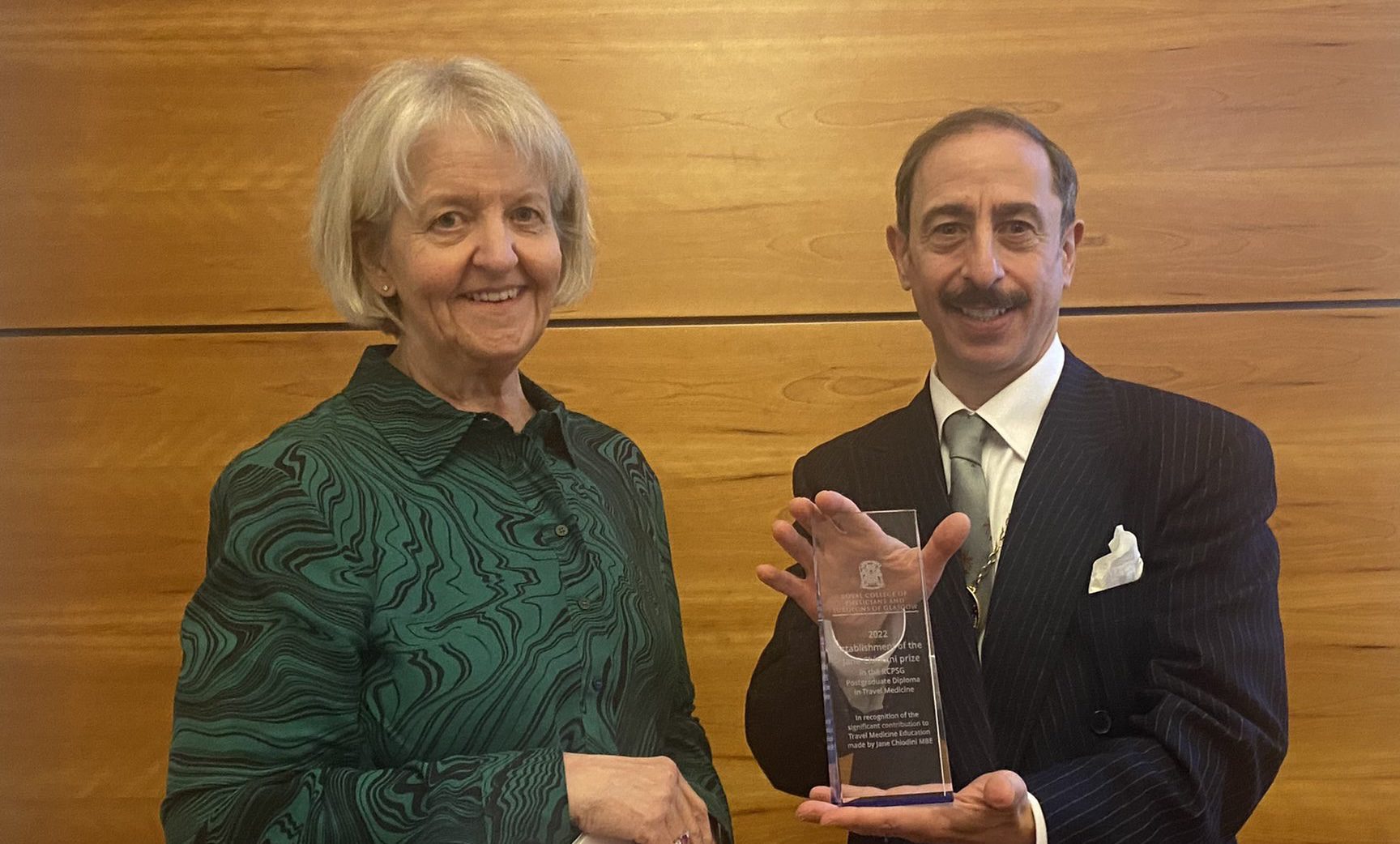 Part of Jane’s work has included establishing the RCPSG Postgraduate Diploma in Travel Medicine. The Diploma commenced in January 2022, and the first intake of students will complete their studies in June 2023.

The prize is to be awarded annually by the College, to the student performing at the highest level in the completion of the RCPSG Postgraduate Diploma in Travel Medicine. The recipient of the prize will receive a cash award of £250, and will be invited to attend the Annual Conference of the Faculty of Travel Medicine.

Jane Chiodini MBE MSc, RGN, FFTM RCPS(Glasg) QN began nursing in 1973 at St George’s Hospital in London and undertook subsequent postgraduate training in neurosurgery and neuromedicine, as well as completing midwifery training. Her interest in travel health began when a practice nurse in the 1990s.  Jane undertook a distance learning travel health medicine course at the University of Glasgow and graduated with a Master of Science degree in Travel Health Medicine in 1998.

Since that time, Jane’s career has developed in travel medicine and she has held a number of prestigious positions in relation to this, both nationally and internationally. Her involvement with the Royal College began in the early 2000s when she was a personal advisor and tutor on the Diploma and Travel Medicine courses run initially by the University of Glasgow and subsequently with the College in conjunction with Health Protection Scotland. In 2006 Jane was one of the founding fellows of the Faculty of Travel Medicine in the College, and between then and 2017 held positions on the Executive Board of the Faculty, including as Honorary Secretary and Education Director. In 2017 she became Dean-Elect and subsequently Dean of the Faculty of Travel Medicine, being the first female Dean of this Faculty and the first nurse to hold the position.

Throughout her career Jane has been a leading figure in the world of Travel Medicine education, strongly advocating for high-quality academic and practical training for those involved in the delivery of travel medicine. She has tutored, mentored and examined countless individuals through their careers and education, and created and delivered material to thousands of nurses, doctors and pharmacists involved in travel medicine. Maintaining and raising standards has also been a priority for Jane and during her Deanship she was instrumental in leading the publication of the Good Practice Guide for Providing a Travel Health Service, which sets the standards of care for practitioners in travel medicine. Jane also drove forward the establishment of the Professional Development Certificate in Travel Medicine and the RCPSG Postgraduate Diploma in Travel Medicine, for which this prize was given.

Jane was awarded an MBE for her services to training and development of travel medicine in 2022. The College recognises Jane’s role as an inspirational contributor and leader in relation to all elements of education for travel medicine.