Today’s ‘tipsfornewdocs is from Dr Lisa Curran who is a Member of the Faculty of Travel Medicine and a Consultant in Occupational Medicine at King’s College Hospital. 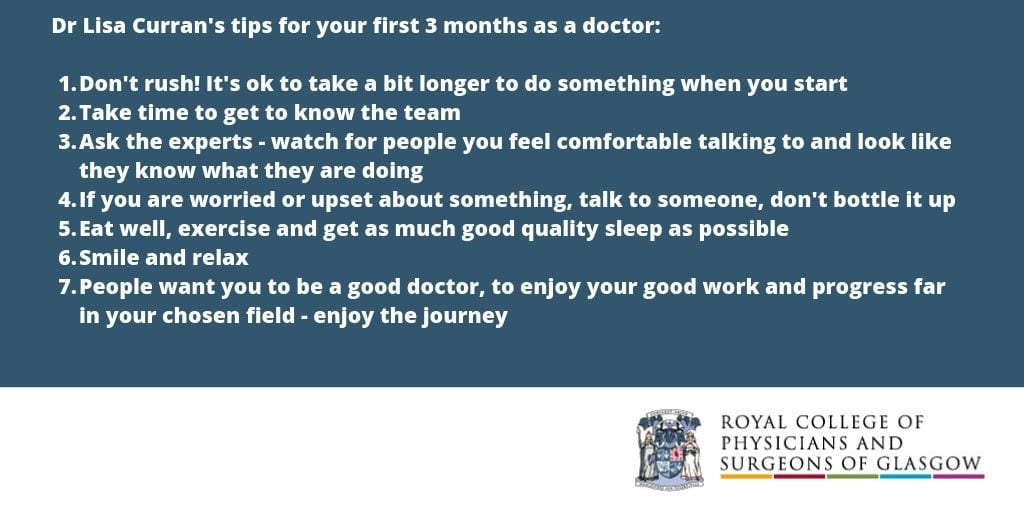 Wednesday 7th August, 1996. The first day I was actually paid to work as a doctor, the start of the infamous House Officer year.

August 1996 to February 1997 I was Medical House Officer for Dr Gallen at Wycombe General Hospital.

What do I remember of the first day, 7th August?

Strangely – not very much! Some things I do remember.

I was called to the postgraduate medical education centre, met the other House Officers and then had induction all morning. I remember noticing the consultant microbiologist was very tall, with a beard, didn’t wear socks and had open sandals. We had tea and nicely cut sandwiches for lunch.

We picked up our white coats and then went off we went to the wards. I don’t remember anything bad happening that day, but actually don’t remember much! I did have a meeting with Dr Gallen, who would be responsible for me professionally. I remember him telling me a bit about his schedule and discussing the English weather and Summer Holidays!

What do I remember from the first 6 months?

I remember the staff accommodation behind the hospital – up the stairs, stark kitchen with bare essentials and my small room. My next door neighbour was a female house officer, seemed terribly sophisticated and composed and had a boyfriend with long hair who looked like a Rock Band member.

I also remember some of my other colleagues very well. My closest working buddy was also in his first house job after medical school at Oxford, and was very popular with the nurses. I had lots of unnecessary bleeps to check his whereabouts. We were always on call together; one of us would cover the wards while the other covered Accident and Emergency. He was into night ice hockey (was an Oxford Blue) and taking the nurses to TGI Friday High Wycombe. I was into running and visiting London.

What do I remember of the patients?

I remember my first death. Remember it in detail. It was my first weekend on call, we worked a 48 hour shift – 24 hours covering Accident and Emergency and 24 hours ward cover. She died during my second day when I was covering the wards. I had seen her several times during the day, had assessed her each time and prescribed an anti-spasmodic for abdominal pain. A crash call went out on Sunday evening as she was unresponsive, low blood pressure. We later found out she had ruptured a massive aortic aneurysm and died. I was extremely upset, felt as if I’d killed her. I remember the Registrar taking me outside the hospital to try and calm me down as I was in floods of tears. He was very kind. It wasn’t my fault apparently. The aneurysm was known, she wasn’t for surgery, it could have happened at any time.

I remember my first Christmas working in the hospital, my daily familiar ward round to see the patients, including one long stay psychiatric patient who had an electrolyte disturbance, and whose bed area was always surrounded with multiple large bottles of diet coke and water. Our daily chats, in a strange way keeping each other company, making human contact, the festive period in hospital feels very different, as if none of us should be there, but conversely it’s the most appropriate place for us to be.

House Jobs in the 1990s I think were different in many ways to Foundation Year jobs now, we had on call rooms between the wards, we worked every other day on call and 48 hour weekend shifts, we knew our patients inside out as it felt as if we lived in the hospital too most of the time.