Africa has suffered disproportionately although it has done little to cause the crisis. 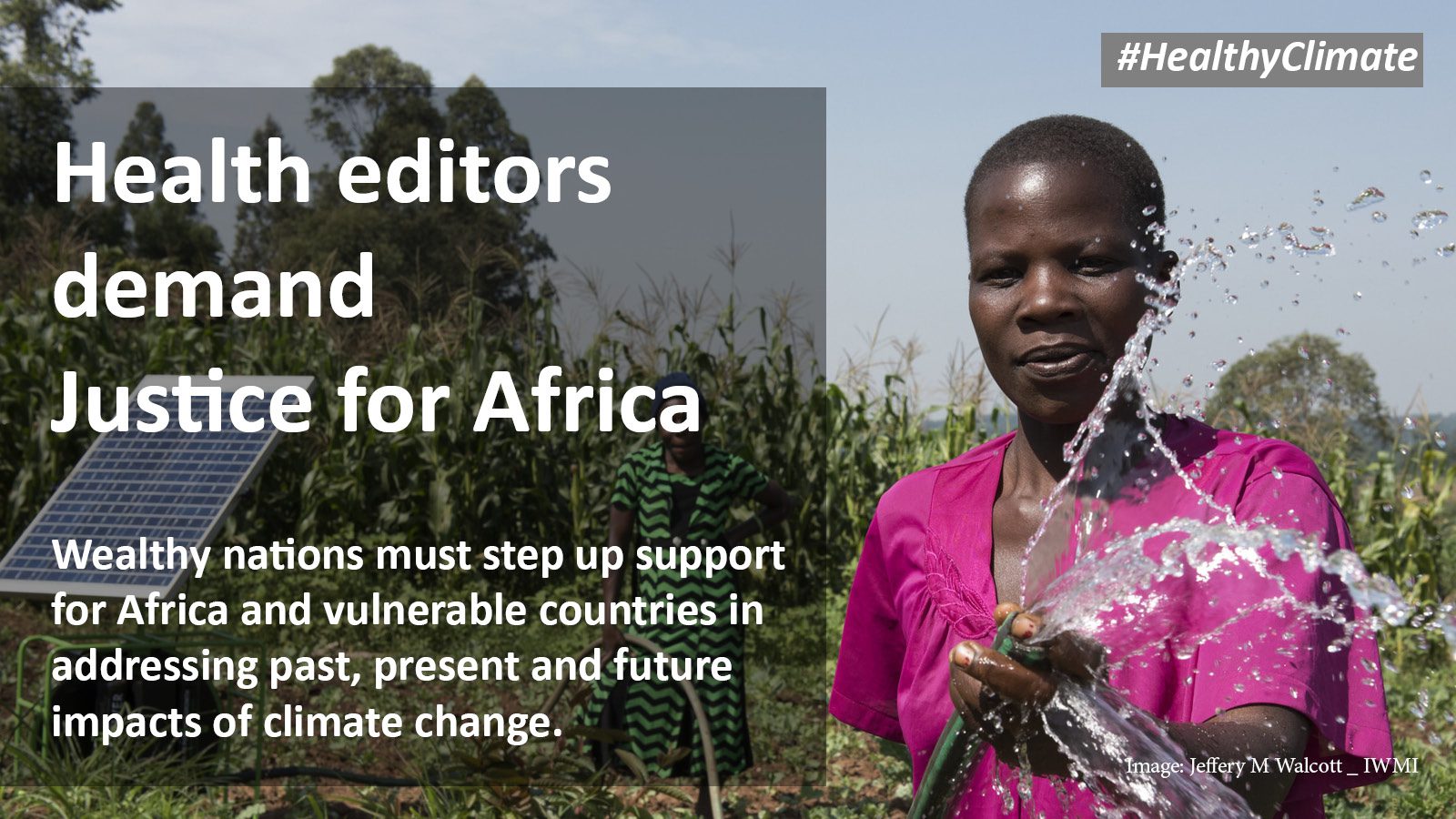 Africa has suffered disproportionately although it has done little to cause the crisis
The damage to Africa should be of supreme concern to all nations, warn editors

Over 250 health journals across the world have come together to simultaneously publish an editorial urging world leaders to deliver climate justice for Africa ahead of the UN Climate Change Conference (COP27) taking place in Cairo, Egypt in November.

Never have so many journals come together to make the same call, reflecting the severity of the climate change emergency now facing the world.

The authors say Africa has suffered disproportionately although it has done little to cause the crisis, and urges wealthy nations to step up support for Africa and vulnerable countries in addressing past, present and future impacts of climate change. The climate crisis has had an impact on the environmental and social determinants of health across Africa, leading to devastating health effects, explain the authors.

In West and Central Africa, for example, severe flooding resulted in mortality and forced migration from loss of shelter, cultivated land, and livestock, while extreme weather damages water and food supply, increasing food insecurity and malnutrition, which causes 1.7 million deaths annually in Africa.

Changes in vector ecology brought about by floods and damage to environmental hygiene has also led to increases in malaria, dengue fever, Ebola virus, and other infectious diseases across sub-Saharan Africa. In all, it is estimated that the climate crisis has destroyed a fifth of the gross domestic product (GDP) of the countries most vulnerable to climate shocks.

The damage to Africa should be of supreme concern to all nations, they write,
because in an interconnected world, leaving countries to the mercy of environmental shocks creates instability that has severe consequences for all nations.

They argue that achieving the $100bn a year climate finance target is now “globally
critical if we are to forestall the systemic risks of leaving societies in crisis,” and say additional resources for loss and damage must now also be introduced.

They acknowledge that some progress has already been made, including early warning systems and infrastructure to defend against extremes, but point out that frontline nations are not compensated for impacts from a crisis they did not cause.

This is not only unfair, but also drives the spiral of global destabilisation, as nations pour money into responding to disasters, but can no longer afford to pay for greater resilience or to reduce the root problem through emissions reductions, they warn.

“The climate crisis is a product of global inaction, and comes at great cost not only to
disproportionately impacted African countries, but to the whole world,” they write.

“Africa is united with other frontline regions in urging wealthy nations to finally step
up, if for no other reason than that the crises in Africa will sooner rather than later spread and engulf all corners of the globe, by which time it may be too late to effectively respond.

“If so far they have failed to be persuaded by moral arguments, then hopefully their self-interest will now prevail,” they conclude.

Lukoye Atwoli, Professor and Dean of Medical College East Africa and Associate Director of Brain and Mind Institute said: “It is time the global community acknowledges that the climate crisis, while disproportionately affecting the continent, is a global crisis. Action must begin now, and begin where it is hurting most, in Africa. Failure to act will make the crisis everyone’s problem very soon.”

Bob Mash, Editor of the African Journal of Primary Health Care and Family Medicine and President of the South African Academy of Family Physicians said: “In Africa we are already seeing the devastating effects of climate change on people’s health and the need to strengthen community-oriented primary health care is now more than ever.”

About Us
Membership
Courses and Conferences
eLearning
Accessibility