For the first time in their 40 year history, the UK Academy of Medical Royal Colleges has held its quarterly meeting outside of London. 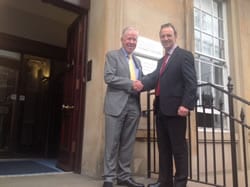 For the first time in their 40 year history, the UK Academy of Medical Royal Colleges has held its quarterly meeting outside of London.

The Royal College of Physicians and Surgeons of Glasgow was delighted to host the meeting of the Academy, which is made up of all 22 UK Medical Royal Colleges and Faculties.

While in Scotland, the Academy Chair, Professor Terence Stephenson and Chief Executive Mr Alastair Henderson visited the Golden Jubilee National Hospital and Forth Valley Royal Hospital before a dinner hosted by the Royal College in Glasgow on 14 July.

At the reception, President of the Royal College, Dr Frank Dunn CBE toasted the Academy. Professor Stephenson replied emphasising the historic nature of the visit and the importance of bringing the meeting to Scotland as an indication of the four nation nature of the Academy.

The formal meeting of the Academy was held in the historic Livingstone room of the College on 15 July. Presidents from Royal Colleges across the UK attended the meeting, which is focused on addressing and agreeing direction on common healthcare matters that will benefit patients and healthcare professionals.

Pictured: Dr Dunn and Professor Stephenson at the entrance to the College.