Global Citizenship in the Scottish health service was on the agenda in the Scottish Parliament at a joint meeting of the Cross Party Groups on International Development and Malawi. 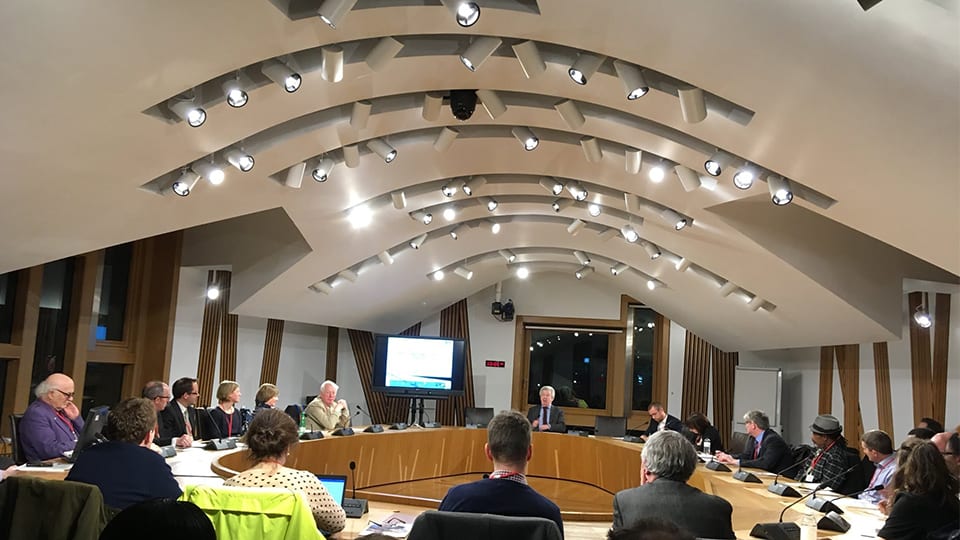 Global Citizenship in the Scottish health service was on the agenda in the Scottish Parliament this week (7 February), at a joint meeting of the Cross Party Groups on International Development and Malawi. College representatives Mike McKirdy and Stuart Fergusson, who co-authored the College’s recent report on the issue, gave a presentation to MSPs, visiting diplomats and representatives from civic Scotland on the scale and scope of volunteering by Scottish NHS in low income countries, and set out a range of recommendations for better supporting this work in future.

The event was hosted by the convener of the Parliament’s Health and Sport Committee and the International Development CPG, Lewis MacDonald MSP, and was attended by representatives from all the main parties represented at Holyrood.

The main recommendations of the report included calls for the Scottish NHS to develop a strategic approach to global health engagement which embraces global citizenship, and professionalising and resourcing coordination and support of global health work at a national level.

Speaking after the event Mike McKirdy, the Director for Global Health for the College said:

“We’re delighted that our report and recommendations have received such a positive reception from politicians and civic organisations. The voluntary work already carried out by Scottish NHS staff in low income countries has already been transformative, and so we believe that with additional support and encouragement we can grow the positive impact from this even further.”

This parliamentary event comes on the heels of a presentation to the philanthropist Bill Gates, led by the Scottish Government, where the College’s work on this issue was highlighted as best practice. Mr Gates later praised this work in a meeting with members of the Scottish Parliament.

Stuart Fergusson, who led the work on the report during his period as a Clinical Leadership Fellow at the College from 2016 to 2017, said:

“There is now real momentum gathering around the idea of better supporting the fantastic volunteering work that is already taking place across the world by a wide range of NHS staff. By taking on a leadership role on this issue the College has created the conditions necessary for making real progress in the weeks and months to come, and so I’m proud to have been able to my part in making this happen.”

A full copy of the report, including case studies and the full set of recommendations, can be found here.