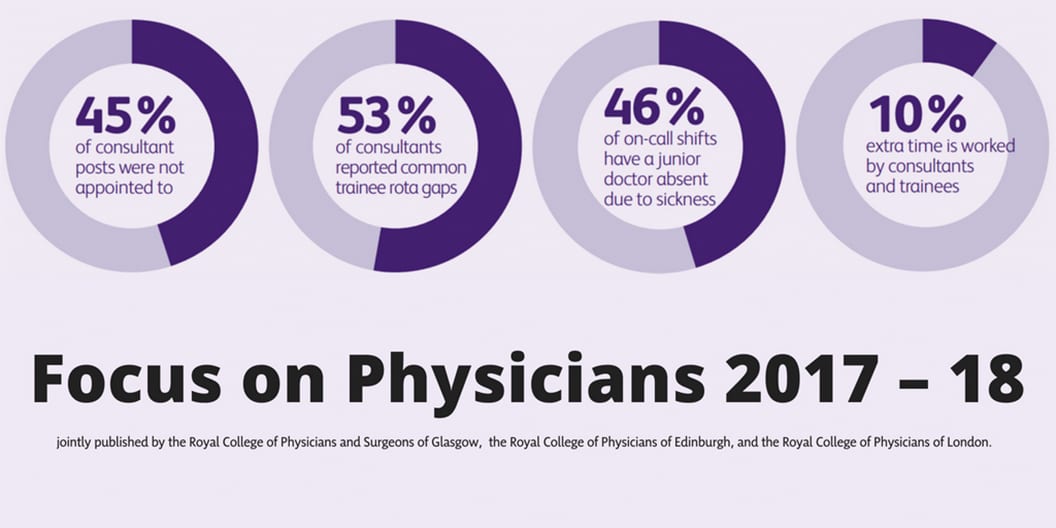 Senior doctors have raised new concerns for patient safety in the NHS across the UK in a new report released today (Tuesday 26 June).

The survey reveals that more than half of all consultants and two thirds of trainees reported frequent gaps in trainees’ rotas, with one in five respondents saying these are causing significant problems for patient safety in hospitals , while three quarters of respondents have highlighted the workaround solutions they are regularly having to find.

Other high-level findings include:

Commenting on the findings of the census Professor David Galloway, President of the Royal College of Physicians and Surgeons of Glasgow said:

“I’m glad that the three Royal Colleges have once again joined together to produce this important piece of work. It’s vital that everyone involved in the NHS now reflects on these findings and takes all the action necessary to replicate best practice and address the challenges that this document has highlighted.

“What’s of particular concern is the finding that almost one in five consultants across the UK reported that rota gaps cause significant problems for patient safety in their hospital. This is an unsustainable situation which must be addressed as a matter of urgency.

“While we welcome short term actions being taken by governments across the UK to tackle workforce issues, such as the lifting of the cap on tier 2 visas for NHS staff, we need consistent and sustained action if we’re to address this situation in the longer term.

“Government, patients and the medical profession must work hand in hand if we’re to deliver the best possible NHS for all.”

“As one of the three Royal Colleges that commissioned this report, we believe that Focus on Physicians provides an important snapshot of the state of play within the medical profession. We welcome, in particular, that 88% of consultants enjoy working in their chosen speciality. This indicates a high level of job satisfaction for consultant specialists.

“Our report also highlights some challenges which must be tackled head on, and we support any actions which allow doctors time to care, time to train and time to research. We believe that these conditions are essential for job satisfaction, and ultimately for enhancing the care that our patients receive.”

The full census findings can be found on our website.